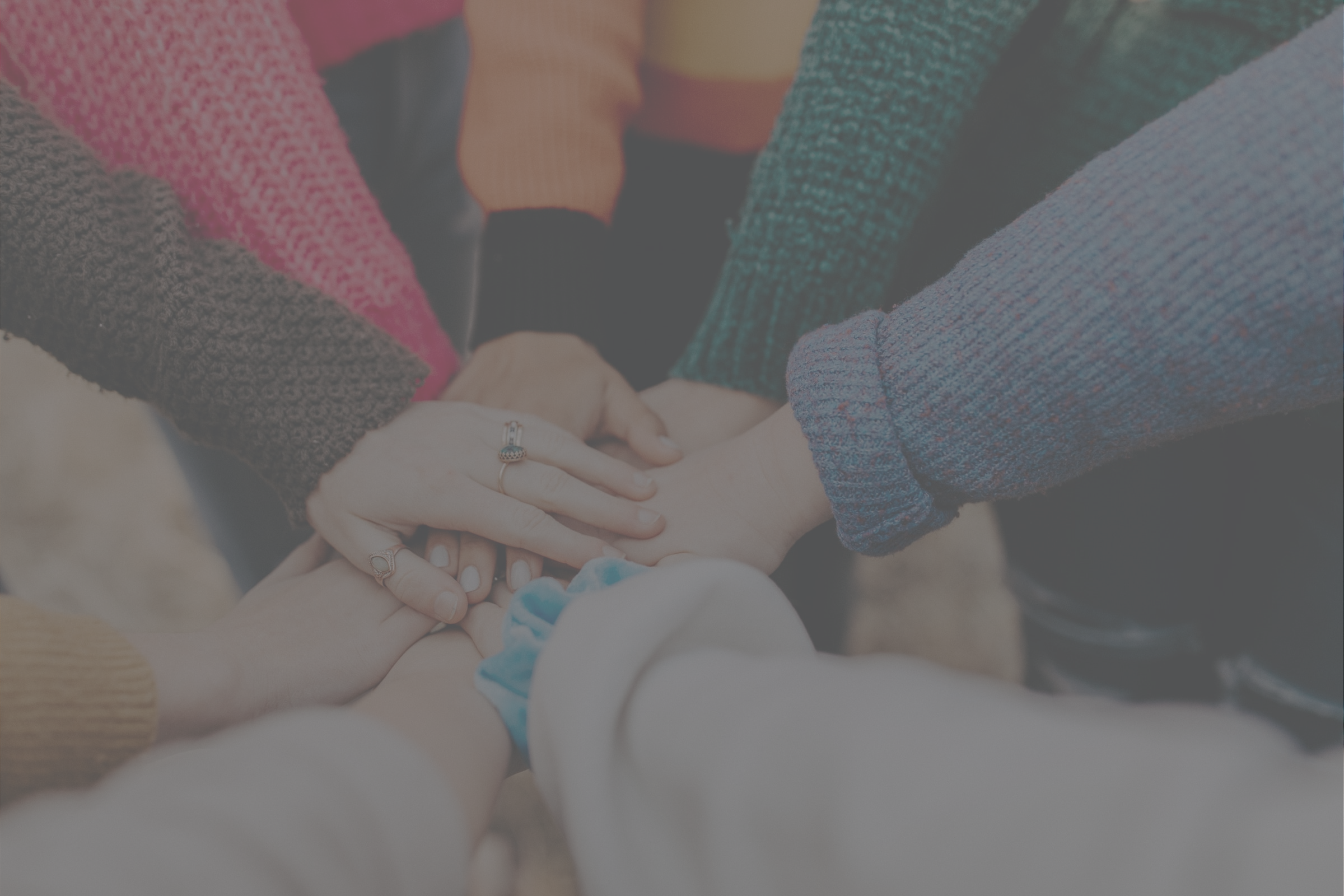 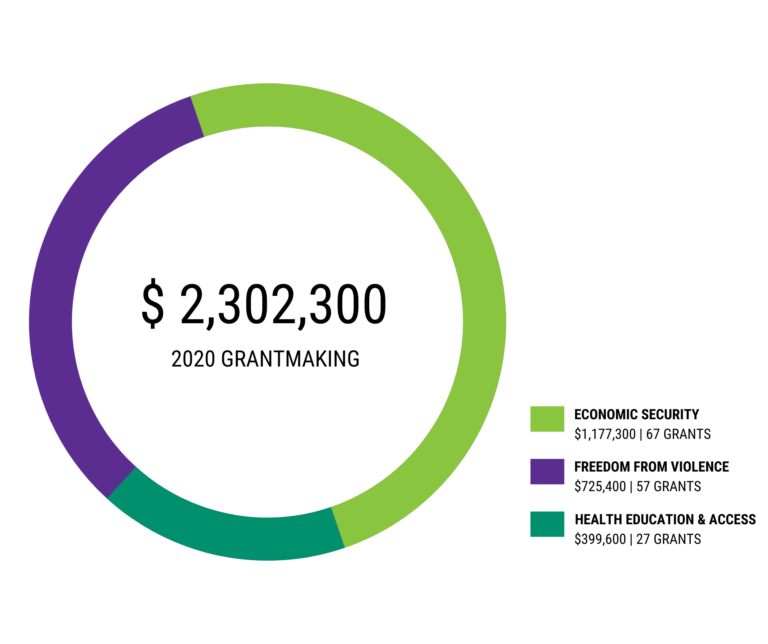 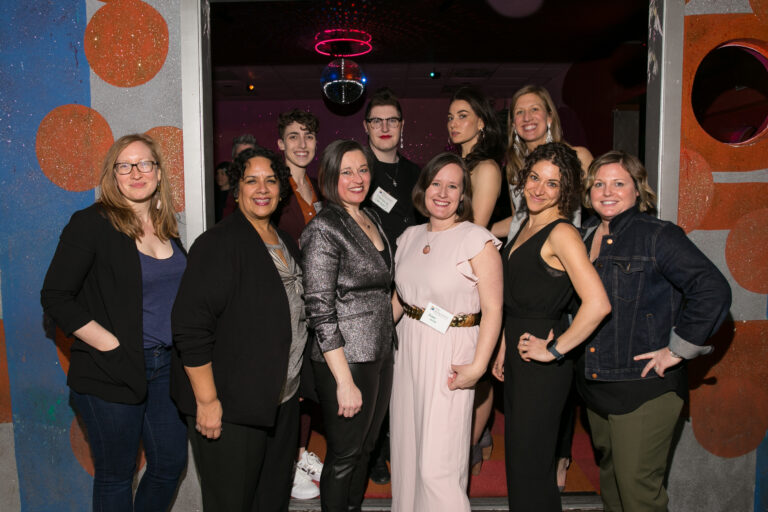 During the height of a global pandemic disproportionately ravaging Black and Brown women, Chicago Foundation for Women (CFW) supported organizations that put women, trans, and gender nonbinary people first. Organizations working to alleviate the barriers they face to adequate healthcare and safety through 62 grants totaling $977,125 during its Spring 2020 Grant Cycle.

CFW is dedicated to expanding freedom from violence in all its forms, including family violence, child and elder abuse, dating violence, sexual assault, sexual harassment, stalking, prostitution, and trafficking. The perpetual invisibility of women, girls, transgender, and gender nonbinary people of color experiencing gender-based violence is why CFW focused on exploring community solutions, interventions, and deeper interrogations to understand the foundational causes of this ongoing violence epidemic. CFW is also committed to enhancing access to high-quality health services and information related to mental, physical, reproductive health, and preventative care.

“With unprecedented times also comes unprecedented opportunity, and at Chicago Foundation for Women, we believe that the window for systemic change has been flung wide open,” said Felicia Davis, president and CEO, Chicago Foundation for Women. “While we support ALL women, girls, and female-identified persons across Chicago, this group of grants particularly prioritized organizations addressing violence against Black and trans women from across the city – a group that is overlooked far too often.”

Through its grantmaking programs, CFW, along with its Giving Councils and Circles, can support changemakers and advocates for vulnerable populations. The nonprofits selected as grant recipients embodied grassroots approaches to their work, restorative practices, survivor-centered initiatives, and community organizing. In addition, during the COVID-19 pandemic, our grantees expanded and pivoted their programming and services to meet the immediate needs of the populations they serve, providing food, housing, and services and support virtually.

Affinity Community Services, which, for 25 years, has created safe spaces, been a vehicle for social change, and brought race, gender identity, gender expression, and sexual orientation to matters of public policy, health access, and community empowerment. Affinity is one of few organizations created and run by Black LGBTQ women. Founded to bring visibility and voice to Black people in LGBTQ communities and LGBTQ people within Black communities, Affinity operates from the South Side of Chicago and has served thousands of people over its history.

Brave Space Alliance, the first Black-led, trans-led LGBTQ Center located on the South Side of Chicago, dedicated to creating and providing affirming, culturally competent, for-us by-us resources, programming, and services for LGBTQ individuals on the South and West sides of the city.

The Chicago Community Bond Fund (CCBF) engages in education about the role of bonds in the criminal justice system, perpetuating the criminalization of individuals unable to pay their bonds. CCBF ultimately advocates for the abolition of money bonds.

For the fourth year in a row, CFW made several grants to the Englewood Women’s Initiative to enhance its strategic alliance of agencies collectively working to strengthen and sustain the economic security of low-income working women and their children living in Englewood. The Initiative is also part of the Women’s Economic Mobility Hubs, regional collaborations of women’s foundations across the country working to increase economic opportunities for women.

Kenwood Oakland Community Organization is Chicago’s oldest Black-led community organization, based on the South Side, founded in response to unjust housing policies, under-resourced schools, and to fight structural racism. Its programming is focused on community organizing and leadership development, providing a space for young Black women and girls to embrace their collective power, engage in healing from their trauma, and fight for equal protection and justice.

Mujeres Latinas en Acciόn, the longest standing Latina-led, Latina-serving organization in the country, provides programming designed for trauma survivors to heal, thrive, and become leaders in their communities. All programs offered are in the language that the participant is most proficient and comfortable in and reflect a true understanding of the community the agency serves. 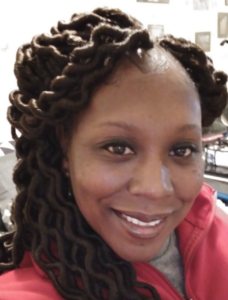 “They must think I’ll show up in a business suit or something,” Stacey shares, holding back laughter. “I show up, and I am dressed like them, I look like them… I see them relax,” Stacey pauses briefly, then adds, “We are proud, Englewood women. Asking for help is hard for us.”

As the EWI’s first Participant Liaison, Stacey’s role is not unlike a caseworker. Since she joined the initiative in 2019, she has helped over 80 Englewood women navigate the often frustrating and circuitous path toward economic self-sufficiency. With CFW’s leadership and ongoing investment, Stacey and the eight nonprofits that currently make up the EWI work each day tirelessly toward the EWI’s overarching goal: to help 60 women-headed households in Englewood increase their annual incomes to a living, sustainable wage that can support them and their families.

In order to build a sustainable future for themselves and their families, EWI women need living-wage jobs, of course. But, to begin to counter decades of systemic oppression and disinvestment in their communities, EWI women also need credit cleanup, domestic violence services, and legal aid to ward off eviction. They need help after periods of unemployment. They need emergency cash assistance. They need time and support to heal from the heavy layers of trauma that most of us will never experience. Most of all, perhaps, they need someone to truly listen to them, to withhold judgment, and to understand.

Having experienced poverty, domestic violence, and other trauma throughout her life, Stacey, or “Ms. Brown,” as EWI women affectionately refer to her, connects to participants on a deep, authentic level. You only need to talk with Stacey for five minutes to see clearly that the EWI is more than a job, and that Stacey gives all of herself — sometimes, too much — to ensure the EWI women know they can count on her. Whether it’s at 5:30 am or late into the evening hours, her cell phone will be buzzing with calls and text messages from EWI women who need her assistance.

“People know they can come to me,” Stacey says joyfully. “I don’t have a balled fist — my hand is always open.”

Without a doubt, the last year has been challenging.  But, when we look toward Sheroes like Stacey, women who are living their lives in service and gratitude, we find hope and forge ahead. 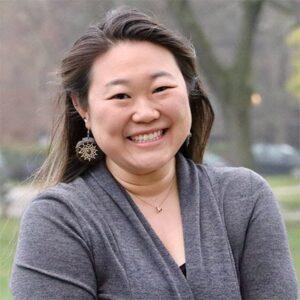 Chicago Foundation for Women (CFW) is investing in the resilience and leadership of everyday Sheroes who are holding our communities together during COVID-19.

A former Chicago Public Schools middle school principal, Sonia Wang, took the CFW grantee New Community Outreach (NCO) helm in April, one month into the pandemic. A proud Southsider for over 13 years, Sonia was drawn toward NCO’s commitment to the healing, reconciliation, and building up of Chicago’s Bronzeville youth and community through restorative justice.

Almost immediately, Sonia noticed that the youth served by NCO regularly purchased groceries for themselves and their families at the gas station or the local corner store, where fresh produce was largely unavailable. In response to the COVID-19 crisis and the temporary loss of the already limited supermarkets in the community due to looting, Sonia led a group of nearly 40 of her Bronzeville neighbors to plant, water, and harvest a small garden on the lawn of a local elementary school.

“I have the opposite of a green thumb,” confesses Sonia. “I had no idea what I was doing, but I am a nerd, and I like solving problems.” Leveraging the gardening expertise of community members, Sonia ensured the little garden could grow as much as possible, and, in May, NCO started free, weekly produce distribution days for the Bronzeville community. Through community partnerships, NCO is able to supplement the produce with additional bags of nonperishables that sustain families throughout the week.

CFW is investing, right now, in Sonia and over 80,000 women, girls, trans, and gender nonbinary people just like her – people who dedicate every ounce of themselves to get our communities through each day safe and healthy. 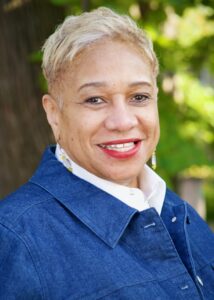 When asked what is giving her hope and strength at the moment, 68-year old organizer and activist Carmen Betances will tell you a story she regularly summons from the early days of the pandemic. A resident of senior public housing, she and her neighbors, quickly realized that no one was coming to save them from the disease. “It became clear to us that we had to fight or flight. So, we bought our own supplies. Our own masks, gloves,” says Carmen, “and, we scrubbed that building to the best of our ability.”

After months of inaction from the Chicago Housing Authority, Carmen and her fellow organizers at CFW grantee Jane Addams Senior Caucus (JASC) once again joined together to fight for, and pass, the Senior Safety Ordinance. Passed in July by the Chicago City Council, the Ordinance requires regular wellness checks for seniors, consistent cleaning protocols for common spaces, protective equipment and training for all staff working in senior homes, and also deems that home caregivers and aids are essential and thus allowed to enter into senior housing during shelter in place orders.

With CFW’s recent grant support, Carmen continues to work with JASC to make sure local seniors understand the Ordinance and how to organize themselves for safe living conditions in their buildings. She regularly conducts socially-distant visits to her neighbors in senior homes to ensure they have access to personal protective equipment (PPE) and know what to do if their rights are violated. She is also fighting for the evacuation of nursing homes that have refused to abide by the Ordinance requirements.

Through the Response, Recovery, and Resilience Fund, we have invested in women-powered solutions making a difference in communities across the region.

CFW invests in community-led solutions to the most pressing challenges facing women and girls.

Investing in economic security, access to health, and freedom from violence for all women and girls, and in stronger communities, for all of us. View Grants

CFW is focused on transparency, the rigorous stewardship of donors’ gifts, and our commitment to investing our assets with a gender lens.

We rely on the community, and in return, the community counts on us to invest for the greatest possible impact. To ensure our grantmaking is effective and efficient, CFW invests in building a strong and resilient nonprofit sector. View Financials

Our donors come from every walk of life and across the Chicago region.

Some give time, others talent, treasure or testimony. They share a commitment to equal opportunity and basic rights for women and girls, to investing in our communities, and they trust CFW to ensure their resources are connected with the greatest need and the most effective solution. View Donors

CFW strives to make every dollar count for equity, whether through our grantmaking or where we buy office supplies. This year, CFW is sharing a breakdown of our spending with women and minority-owned businesses. View Vendors

For and by women, girls, trans and gender nonbinary individuals. View Leadership